The Unicorn and The Goats 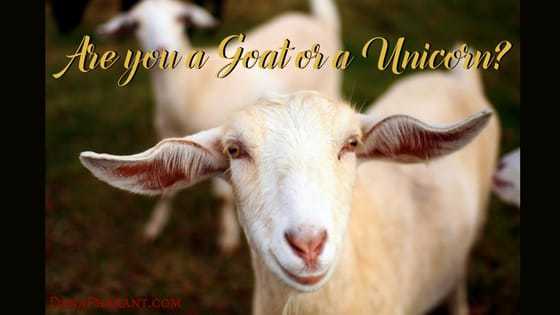 I had a fantastic catch up with a friend last night and as she was sharing her frustrations with her networking group it struck me how much she was defaulting to making herself wrong instead of acknowledging her gifts and talents.

I have watched her over the years try to make the networking group thing work for her and while she is dynamic with getting other referrals, consistently shows up, creates rocking infomercials, and has the coffee meetings to get to know other members better She does not get referrals back.

I was surprised that she went back to this networking organization given that 10 years prior she had been in one of these groups and it was exactly the same thing. They all loved her, chatted and became friends but next to nothing in the way of reciprocity.

It is really easy to slide into “what am I doing wrong here?” or “why do they not like me?”  Given that it is a repeat for her, it would be really easy to do the question of what is the common denominator. Hum…that would be her, but maybe not in the way you think.

What I see is that she is a shiney fucking unicorn networking with a bunch of goats.

They might be lovely goats, but goats don’t get unicorns. They look at them with awe but have no idea what to do with them. They network well with other goats. Goats are happy to work hard, they don’t tend to dream big and they can’t fly. Goats also want to stick with what they know, what is comfortable. We need goats, goats are awesome. It is just that goats don’t mix well with Unicorns.

So when you are Unicorn in a room full of goats, you feel like the odd woman out. You notice you are not like everyone else and that feels awkward.

My girlfriend needs to network with other Unicorns who can go “Wow, you are an awesome Unicorn. What are you using to get your horn so sparkly?”

So many times I see women default to the “What is wrong with me?” position instead of even considering that maybe you are the sharpest tool in the shed and it is time to find a different group to hang out with.

Occasionally, I would have someone perk up and say tell me more, but more often I would get women who suddenly found an excuse to move away, or even more extreme I would get “Oh, I am very happy with my husband for that.”  LOL!

Then I figured out what the real problem was – I was in the wrong groups. January of this year I went to my first CAPS (Canadian Association of Professional Speakers) meeting and there I meet my tribe of fellow unicorns. They all were in awe of my platform and were eager to learn more. They loved it, they got it. And I got that it was not me!

I was not wrong, I was not fucked up! Phew!

For a while I bought into thinking that I needed to change who I was in order to be seen, make money and do my coaching. I forgot to check in on one critical element when I was looking at what my networking was creating: was I in front of my target group?

When I asked that question it was clear that the woman’s groups I was going to were a bunch of goats that had no idea what to do with a Unicorn. They were lovely, but most of them were thinking small and playing small. Not a place for someone who comes in and says “hey would you like to change your whole world? Change it so that you have fun and show up massively so that you can change the world the way you have been longing to do?”

That kind of massive radical change scares the goats, but for fellow Unicorns they are like “Yeah! Count me in!”

How do you shift into your brilliance?

Making the shift to see yourself as awesome is a gradual change.  The first thing to do is to give yourself some time to move into it. As much as you would like to have it change overnight, that is highly unlikely and will put a lot of undue pressure on you.

There is a super tool you can play with to move things towards owning your brilliance.

I love the power of questions. From the perspective of energy, when we ask questions we create an energetic being of sorts. An entity that goes out and gathers up evidence and information for the question that you just asked.

So, when you ask a question like “why am I so fucked up?” that being goes out to bring you the very evidence to support your question, and you get the hit of all the stuff you have messed up or did wrong in your life.

What happens for most people is that they get an immediate hit of some reason they are good at xyz which is usually from the brain and then other information or “hits” intuitively come in later and continually add to what you are asking.

For me this is a super fun way to implement the What you Focus on Grows concept. Although easier since you only have to spend a few minutes in a playful energy with it, then go on with your day knowing that the intuitive hits are on their way.

If you think you might be a shiny fucking unicorn hanging out with a bunch of goats and you are ready to own your brilliance then let’s have a talk about what it is actually going to take to get you there.